I woke on Saturday after a reasonably early night to be greeted by a gloriously sunny day and got myself downtown to one of the places you are guaranteed to find me in if Liverpool FC are on the TV. Back in February I had discovered that there are a great many LFC fans in Iceland (I’ve already met two in Skagaströnd) and I watched several matches in Bjarni Fel Sportsbar and for a while Liverpool kept winning. As many semi superstitious sports fan knows you don’t mess with a streak and so it was that I watched nearly all of Liverpool’s matches until they lost there. Liverpool were visiting Arsenal at The Emirates and playing in their black away kit. I sat there eating my cheeseburger lunch and watched enthralled as Liverpool went  to win 2-0. The day is always a little bit sweeter when Liverpool win, a good start to the day then.

A small preview of the day to come was the marathon as the street was closed from traffic and runners were cheered on as they neared the finish line.

My observation from the previous night that I might be in Reykjavík, USA and not Reykjavík, Iceland wasn’t exactly quashed when I spotted this arrangement of flags by the pond! 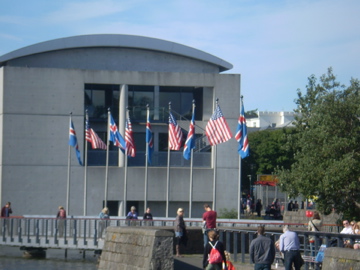 But what is Menningarnótt? I hear you cry…since that was one of the reasons I came to the city. Reykjavík has festivals throughout the year ranging from Iceland Airwaves, Gay Pride and Menningarnótt. All the galleries and museums are open and hold demos and tours as well as outdoor stages are erected for bands to perform on. Menningarnótt (Culture Night) is pretty much an all day and into the night event.

The first exhibition I saw was at the National Gallery of Iceland which is showing ‘Femme – Louise Bourgeois’ until 11th September. While in now way a fully comprehensive retrospective its a good show encompassing sculptures, prints, drawings and textile works. I took great interest in the presentation of the works on paper as a way to display a narrative or a cohesive process of thoughts. The works were shown together literally side by side in frames. Any working through of an idea of theme from a personal standpoint has been normally restricted to sketchbooks but here the sequence of images were placed side by side. The vitality of line in the looser works on paper by Bourgeois did make me wonder if I worry too much about the ‘finished, polished’ work before showing anything. There was also one of the spiders, while not as large some of the others I’ve seen in the past, it was still memorable.

I am now convinced that there are indeed elves or the ‘hidden people’ operating in the Reykjavík area. This is due to the fact that the flat where I was staying has what the landlady has described as old locks that need looking at. The first night after I went out and returned, I couldn’t open the door with the key and sent a text message saying that maybe I had the wrong keys. Of course the door then opened straight away on one turn after that even though I’d spent 5 minutes earlier getting frustrated and half expecting the police to turn up. This happened more than once for me to now be pretty convinced that behind the door was some little guy holding onto the handle with two hands when I put the key in the lock.

After I’d eventually got back in around 330pm and stopped f***ing around with the door and picked up my portfolio, I headed back into town and stopped by the Reykjavík Art Museum to see the shows there. I wasn’t overly engaged with what was on there and can’t actually remember that well what I’d seen there!

In February I had visited and subsequently used the workshop at The Icelandic Printmakers Association and they were also having an open day with printmaking demos. There I was able to catch up with members that I’d met earlier in the year and to show them the work that I’d made since my last visit. I also got to meet other members and to see the work in the exhibition space next door. As an added bonus I sold a print as well! While showing my work to one of the members, one of the visitors had spied my work and wanted to see it. One of the observations that people have made about my work is that its often monochromatic although recent work has seen an injection of colour. Strangely, I showed her the colour workfirst but she wanted to see the work in black and white before spying a red version of a print and deciding decisively that she wanted it. That seemed as good as a time as any to take a break and I headed out to dinner with a spring in my step for the second time that day. 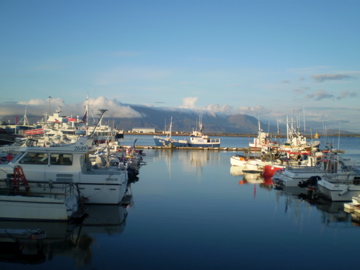 I decided to have dinner at the harbour that evening although with so many people in the city, I had to wait longer than I wanted to for dinner and had to resign myself to missing some of the events that I’d hoped to go to.

Down the street from the harbour is the SÍM house which includes an exhibition space for artists participating in the residency. SÍM is The Association of Icelandic Visual Artists and I met the August artists and saw their work. By this time there was a real buzz and the streets were starting to fill up with people.

I’d found just coming back into the city slightly weird this was a whole another level of weird. I’d never seen this many people in Reykjavík before.

As the sun started to set the crowd seemed to swell as did the noise and the level of expectancy rose. 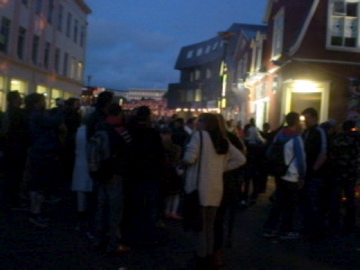 Harpa is Reykjavík’s new concert hall and it was still being constructed back in February and was opened in May. It has had about three official openings since it opened and Saturday was another one, the glass facade was designed by the artist Olafur Eliasson and it was to be illuminated for the first time. Since this is my blog and I can do what I like 😉 I’ll jump back in time and show some photos from 1st August when I first got to the city and went to visit Harpa. 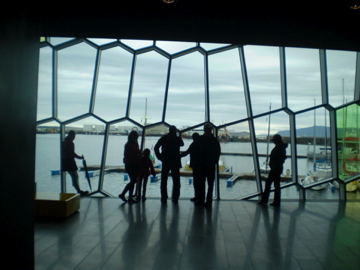 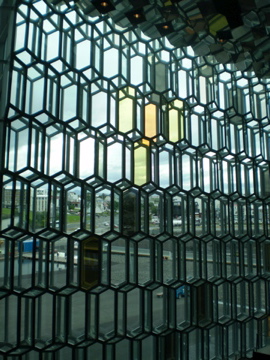 However, next to the fireworks the illuminated facade seemed a little bit disappointing or maybe I was too far from the building. At intervals parts of the facade lit up in primary colours but somehow I was expecting more. The fireworks were good though.

Harpa is on the left.

I did have a couple of beers after that and was amazed at how crowded the bars were. However, I was fully aware that I had a coffee appointment on Sunday at 1030 and didn’t want to miss that or be hungover.

If I’m perfectly honest despite looking for familiar faces which I didn’t find for a second night in the bars, I’d had a pretty damn good day already with one key ingredient missing which would have made it even better but you can’t have everything…till next time.