There was a break in service since I was feeling a little under the weather for most of this past week.

Another reason that I didn’t want to drink too much on Saturday night was that I had a breakfast appointment. My younger brother back in England had worked for a  woman who was married to an Icelandic artist and when word of my travels had got round I was asked if I would like to  meet the artist.

I met Magnús first in London in December briefly and then again in February when he was kind enough to take some time to show me his work in some of the city buildings. Magnús and his wife were also very generous in inviting me to  dinner and I assisted with part of the installation of one of his pieces at the National Museum of Art. A real thrill was to be had by those at the SÍM house when he came to the evening show that the residency artists hold.

It was great to see Magnús and his family again over coffee and breakfast and to be able to catch up with what he and the family have been up to.

I bid a fond farewell to the city and headed off to the bus terminal where I’d arrange to get a ride back with the same driver.

This time though the passengers were different, this time there there was a young boy and his dad. They offered me the front seat and off we went back north. The dad and the driver spoke in Icelandic, I couldn’t tell you what about but they obviously were on amicable terms. The boy sat singing to himself quite happily and only once asked what my name was. 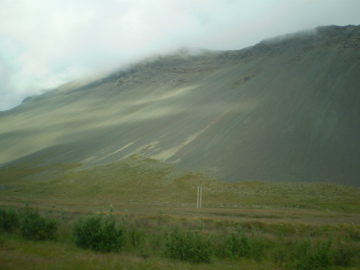 I took a few shots from the front passenger seat which doesn’t do the landscape real justice.

As we neared the end of the line for me the rain started to fall and I was starting to dread the idea of trying to hitchhike back. I asked the driver which direction I needed to head for the turn back to Skagaströnd, instead we reloaded my bags and headed off again in the car. He decided to take me all the way in for which I was very grateful and during that short period I was asked what I was up to in Skagaströnd.

After a long journey I was kind of relieved to be back in Skagaströnd with its empty streets.