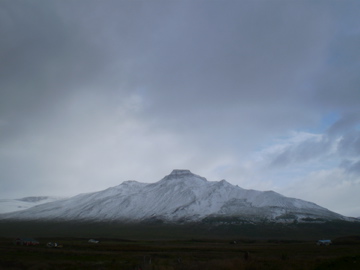 I have a new hobby, I like hiking up mountains! I will make it my new hobby to hike up a mountain wherever I go from here on in! In Skagaströnd overlooking the town is a mountain called Spákonufell.

A little history behind the name, Spákonufell which means Soothsayer’s Mountain is named after Þordís the soothsayer who built her farm by the slopes of the mountain. It is said that she hid her treasure in a chest high up on the mountain. However the treasure could only be found by a woman who had not been baptized in the name of the holy trinity or any of God’s other titles. According to the information in the municipal pamphlet the key to the chest would then be delivered by two ravens.

From my kitchen window I see the mountain and on the walk in to the studio or leaving the studio. Some days its shrouded by low cloud or the low clouds cast dark shadows upon it turning black. Throughout August it was one of those things that you say you’re going to do but never quite manage to do for whatever reason.

After 2 days in Skagaströnd, one of my first pictures of Spákonufell. 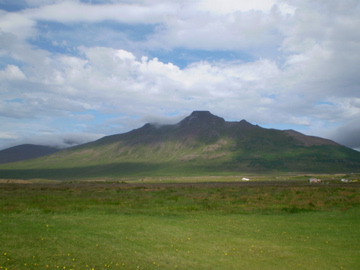 The rest are taken over the duration: 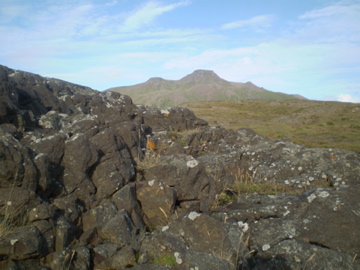 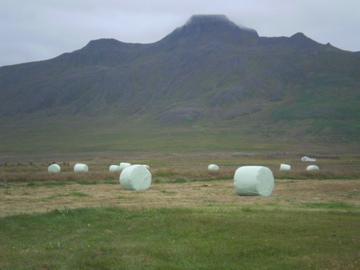 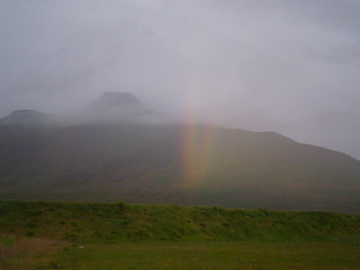 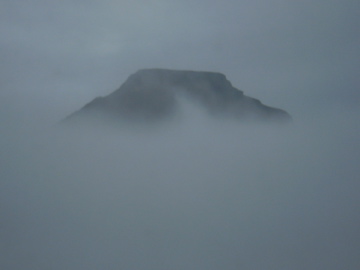 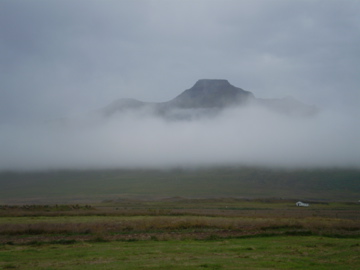 Last Wednesday 14th September, the weather was really fine and fearing that it may be the last of the fine weather I went up the mountain with Joseph. We got a lift to the local golf club which faces the North Route up the mountain. The technical data in the leaflet is as follows:

Duration: 2 hours to the top 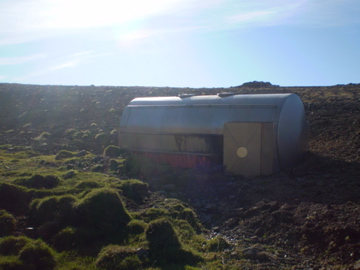 A rather odd sight…we carried on although it was evident who was the old man out of the two us as I found myself watching Joseph open up a sizeable gap on me yet he was still in sight. 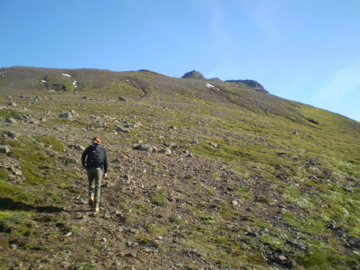 It did start to get steeper at some points and there was still a little bit of snow up there from the previous 5 days. This is Joseph just before he started jumping up and down in the snow which apparently gave him an incredible sense of pleasure. 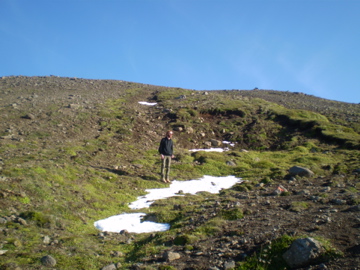 On we went at some points in the shade the ground was still a little frozen or a little slippery. 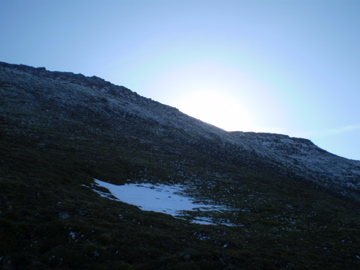 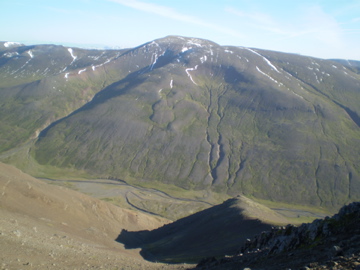 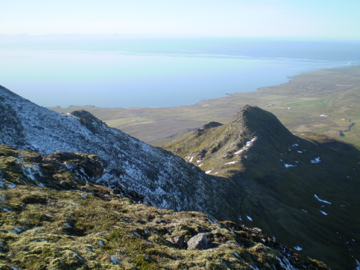 Getting closer to the top now…

The top is called Borgarhausinn its a huge mossy plain much larger than you imagine from just seeing the side from down below. Its a curious texture when you walk on it, yielding under your weight but springing back into place when you lift your foot. 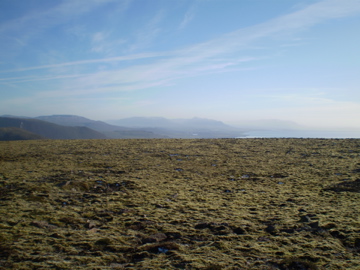 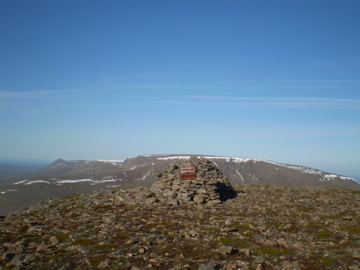 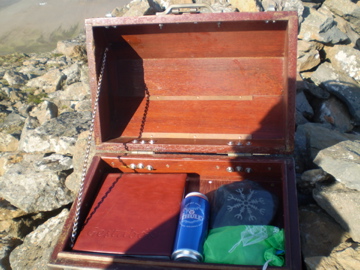 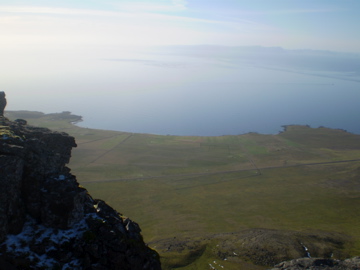 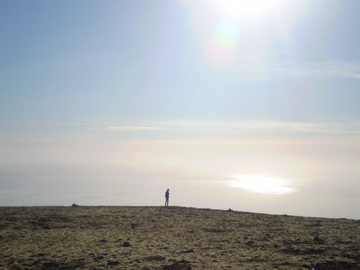 We found the chest! Well alright not THE treasure chest but one with a guestbook where we both signed our names. I have numerous pictures from up at the top but somehow they don’t seem as good as being up there nor do they quite capture that sense of accomplishment that comes with walking up to the top. 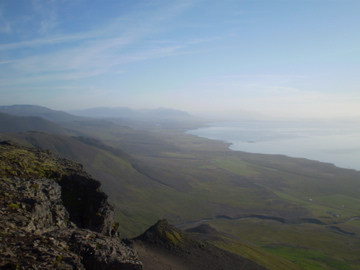 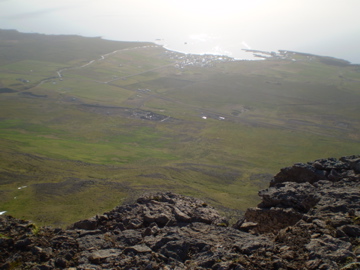 Going back down should be easier…or that’s we thought. The trouble is the paths are not exactly marked in large, neon signs which you don’t really expect anyway but rather with small pegs or a touch or spray paint: 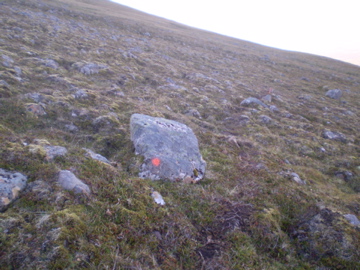 The only thing is while a rock with a touch of orange is kind of fun in a weird way, they get to be pretty hard to spot. Now if I thought Joseph was quick going up the mountain, he practically ran down the mountain. I had him in sight for a good amount of time but at one point as the terrain dipped down then back up into the sun, the last I saw was his silhouette go over the top. By the time I got there I couldn’t see him at all.

I saw these guys though:

I tried asking them if they had seen Joseph but they couldn’t hear me or were pretending to ignore me. I knew to head down and towards the sea but without any markers and a terrain that was increasingly unpredictable and with no sign of Joseph, I started to grumble to myself.

I had visions of Joseph drinking a coca cola at the golf club and was rehearsing the things I was going to berate him with. Like not even being a spot in the distance for me to follow and what kind of mate was he…etcetera and other choice words being with the letter ‘F’ amongst others.

As I came up over another ridge who should I see but Joseph wondering if he’d come back for me…I caught up to discover he’d also lost the path and had actually nodded off on a rock while waiting for me to appear. We walked back and made it back to where we’d started.

If anything it actually took us longer to get back down the mountain than to go up but was well worth it.

The next day I could still feel it in my legs and Joseph was hobbling around with a sore knee.

But we’re both glad we did go up to the top after saying it for a month.

Is going to up mountains going to be my new hobby? Nah, probably not.