I have been to Kyoto before and despite the seemingly small nature of it there is a surprising amount of things to see with many on must see/do lists for the visitor to Japan. There are still many attractions there that I always say to myself that I will go and see each time I visit but somehow don’t manage to.

Due to downloading all my pictures in one batch on the same day from the memory card, I discover pictures that I don’t recall taking or couldn’t find previously. So here’s a picture that I wanted to accompany the previous post of my rather cramped room with too much furniture. 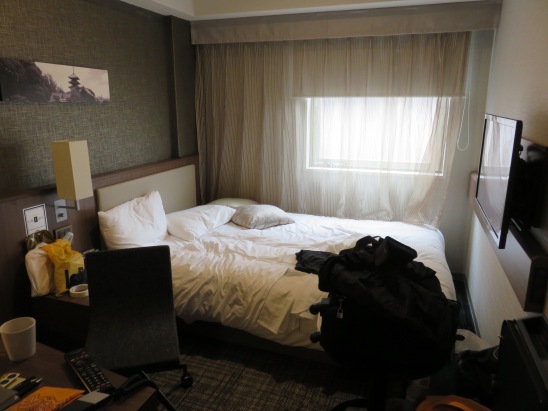 As mentioned previously, my research into when to go and so on and so forth was somewhat erratic due to a sudden burst of work before leaving and being overwhelmed by the amount of information that my little brain was trying to process in terms of where to go in Japan. I had heard of the Gion Matsuri in passing from friends who lived there who more often than not would complain about there being too many people. I knew there were floats and traditional costumes but not much more, I was about to get a first hand look up close.

The webpage at Kyoto Visitor’s Guide does a great job of succinctly explaining the background of the festival and then outlining the activities that lead up to the final parade.

Outside on the street, the construction of the floats was already well under progress, no nails are used. 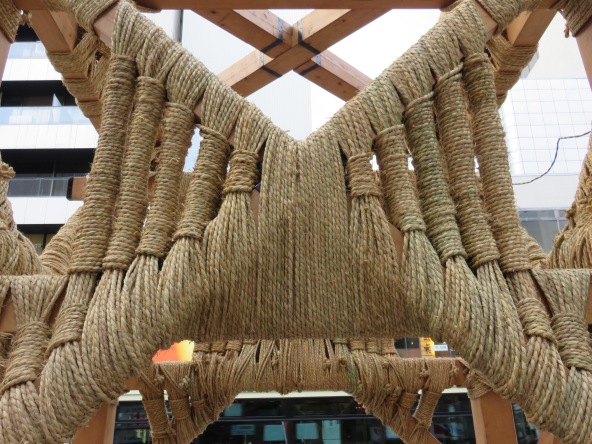 The rain that I’d been experiencing the last few days had made way now to temperatures that were rapidly rising with a high of 34° predicted, the temperature is one thing then the humidity is often in the 90% region. It was bright and sunny at least I’d had the foresight to buy my hat the evening before!

One of the places that I had meant to see on previous visits to Kyoto was Kiyomizu-dera, which is an independent Buddhist temple in East Kyoto. The temple is the temple of the Goddess of Mercy, although in all honesty I am only learning this as I research things to write here. It was also registered on the UNESCO World Cultural Heritage List as one of the Historic Monuments of Ancient Kyoto.

When you first arrive at the site after making your way up the hill through a street lined with shops and restaurants offering food and souvenirs.

At the top you reach the Deva (Gate) and Three Storied Pagoda and the bell that then lead into the temple complex.

As you make your way round passing the different buildings, you do start to appreciate with some awe and wonder at the work that was undertaken to construct and then to maintain the buildings.

At almost every large temple in Japan you will find a place where they sell Ema Votive plaques where people write their wishes and hang them up. Typically they might be for the zodiac animal of that year, the zodiac in Japan uses the Chinese animal types. Sometimes the designs might be something that the particular temple or shrine is known for, a good example is foxes at Fushimi Inari. The money for the plaques is used by the temple for upkeep and so on, you don’t have to write your wish and leave it there sometimes people buy then and keep them as a souvenir.

I took the picture from this angle because I found it somewhat amusing that the street artists had been diligent tourists as well and made the effort of visit the temple but still felt the need to slap their stickers. Before you start tutting though, there is actually a Japanese precedent for sticking things on buildings, called Senjafuda. Originally left by shrine worshipers, they became frowned upon by temples as less people would follow tradition and not pray nor buy a stamp from the shrine before applying their senjafuda. I’m sure there must be an article somewhere linking street art slapping/sticker art and sejafuda somewhere.

However, I digress, the main hall of the temple has a large veranda supported by pillars that gives an impressive view of the city and makes for the hall itself being an iconic image in its own right. 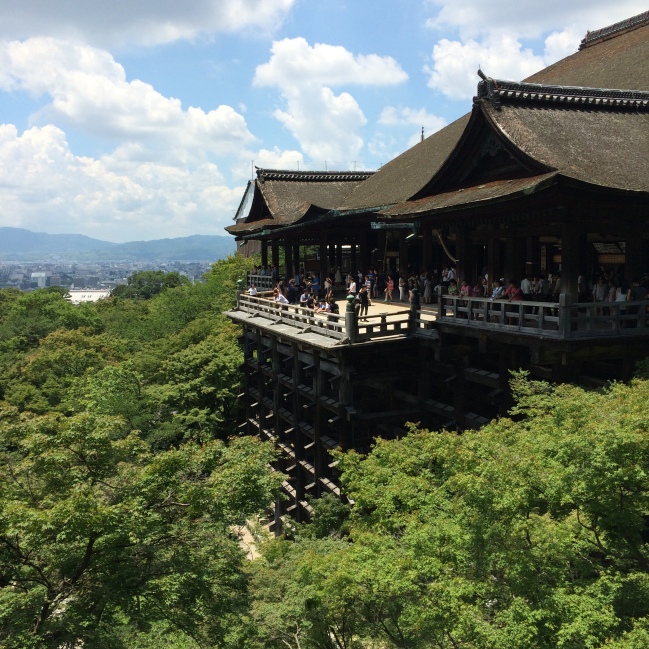 I had a good wander around the site and must admit the heat was starting to get to me as well as the number of tourists, dotted around the temple are numerous smallish refreshment cafes although I use the word cafe with uncertainty since they don’t look anything like their European counterparts. In need of cooling down and some sort of refreshment, I chose a Japanese summer staple called  Kakigōri which is shaved ice flavoured with syrup.

And yes, I did manage to eat all of it!

I still hadn’t had lunch…already feeling the heat and starting to hire I headed out and down the hill, I’d passed a promising looking restaurant earlier and had decided I’d go there. However, it seemed to have disappeared and I was starting to consider other options, sometimes the smaller streets in Japan have this way of looking the same adding to the confusion of not always being able to read the street signs. I also got sufficiently distracted and taken off course by some of the shops along the way.

It was 1337h by the time I found the restaurant, the reason that the time is so ptrecisely noted is that it says as much in my notebook. The restaurant’s name was Yoshimura Kiyomizuan, (the website is in Japanese).

There are also Tripadvisor reviews of the restaurant, I had picked it probably because I felt like eating soba and that the menu appealed to me.

Zaru soba is buckwheat noodles served cold and dipped in sauce and eaten by slurping, one of my favourite summer foods.

The Sansai Soba, bottom left in the picture was served in hot soup and again used the same soba noodles except this time topped with mountain vegetables.

Above that is the small bowl of Tempura on rice, a larger portion can be a meal in itself and is called Tendon  which comes from combining the words Tempura and Donburi (bowl), it has nothing to do with the English meaning of the word!

I really enjoy the lunch sets in Japan since it allows the glutton in me and the indecisive part of me to try several of the foods that take my fancy on a menu at the same time.

I was particularly impressed with the Sansai Soba at the time from my three dishes.

I made my way down the hill after lunch, the walk down was easier and perhaps with some renewed vigour from eating

, I made my way to the bus stop.  The fact that I ended up walking from the bus stop to the top part of the main shopping street probably came about from just a natural curiosity of what was around me. As much as I might complain and moan about the temperature, there is still part of me that will wander off with eyes wide open.

I got as far as the street that turns into Gion, called Hanamikoji, I started to head down it but my energy level had waned again and I decided not to explore that time. However, that is not to say that you shouldn’t go and see for yourself in fact I would recommend that you do go. It has many preserved traditional buildings as well as being one of the most well known and exclusive geisha districts in Japan.

Which is where I spotted this Maiko, (the make up and the hairstyle is the give away) apprentice geisha or geiko,  she slid out so quickly that I’m not even sure which building she came out of. I got my picture before the other tourists suddenly cottoned on then it was a kind of mayhem with tourists behaving like paparrazo, chasing her down the street and taking her picture. I wonder if secretly they love the attention or just find it incredibly cringe worthy. She had to stop at the crossing for the lights to change and then she was off again, bear in mind that she’s wearing kimono and sandals so a full on run is out of the question but I have never seen anybody move so fast in that footwear. 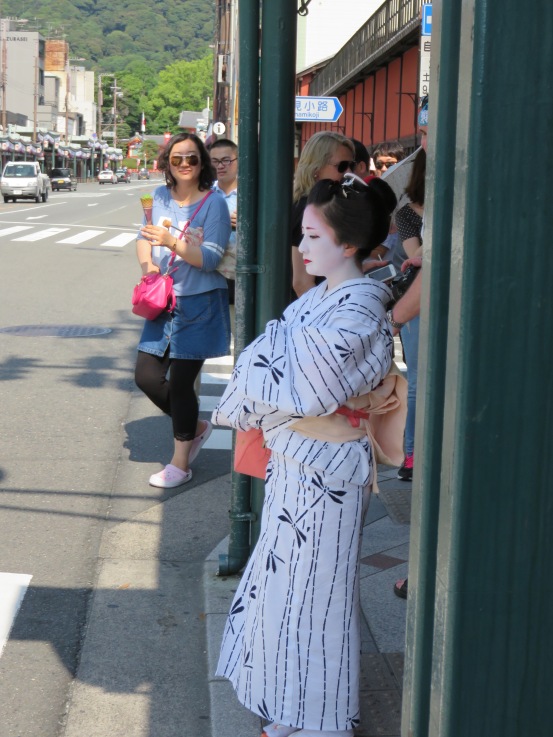 It’s not common to see them but it is possible and so there is an palpable sense of excitement when one does appear either on the street on sometimes at the station.

I think I must have wandered back towards to my hotel stopping in various shops along the way as a way to cool down in the air conditioned spaces as well as just to see the strange and wonderful things you can or could buy.

Please note that any advertisements shown below my posts are put there by WordPress, not by me. I am not responsible for whatever product or service is advertised and it being there does not mean that I endorse or recommend it.