It seems to take about a month for me to sort of settle back in to a kind of routine either of time spent, places to go, people to see and so forth.

After 2 months away from printmaking which was something I decided upon and by virtue of being in Skagaströnd, I have returned slowly but surely to the print workshop at Dekkle in Hertfordshire.

I’ve been busy filling sketchbooks since my return from Iceland not with work that obviously calls to mind being inspired by Iceland since my work is not representational or naturalistic in that sense. However being in Iceland and returning from Iceland does seem to fuel some sort of creative energy in me.

A large part of my artwork has been in making prints and at the studio I am fortunate to be able to use this press: 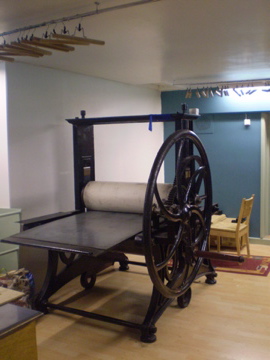 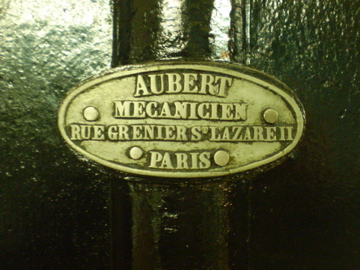 After 2 months without making prints I wasn’t sure if I’d really missed it or if I didn’t really miss it.

So a little begrudgingly I started this steel plate last Friday.

The plate has been covered with Hard Ground which is a wax resistant to acid and then the line work is made by drawing into the ground.

This is then placed into acid (I left my plate in for an hour) and the exposed areas are ‘bitten’. I was actually quite enjoying myself by now, preparing the plate, drawing into it and the like, perhaps its keeping myself busy?!

The ground is cleaned off leaving the plate to look like this:

The plate is then inked, that is covered with ink and then wiped so that the ink remains only in the etched lines. (My hands were black at this point hence no photos of inked up plate.)

The plate is then put through the press together with a sheet of paper. The paper picks up the ink from the etched lines, making a print.

This is the proof from the plate, not bad but I was a little disappointed with the black smudges inside the circle and on that right hand edge. These happened where the ground was thin and also probably from leaving the plate in the acid for so long.

I didn’t get back to the studio for another week until today during which time I’d thought about what to do with the plate. One solution would be to try and burnish/polish the unwanted black areas out, not fun with a steel plate. I opted for another solution which was to stop out, that is block out the circle and etch the area outside.

This is the end result…I’ll take a better picture at some point. 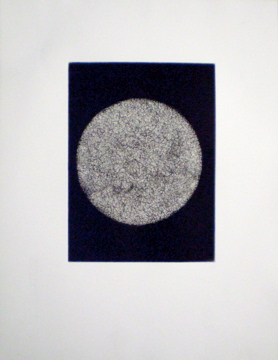