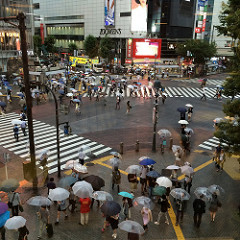 Then it was onto Shibuya, which is one of the most popular parts of the city for both locals and tourists like myself. It is an area that I know somewhat but by no means have explored to the point of being able to say that I know it like the back of my hand. Shibuya is an area chock full of department stores, clothes shops, restaurants and a few good bookshops that is brimming with energy and seemingly never empty. It’s pretty hard not to find what you’re looking for in terms of shopping and it’s a great place to people watch. The area is dominated by the crossing outside the Hachiko Exit which is known as the Scramble Crossing.

Please click on the link https://instagram.com/p/4sPelUJyPC/?taken-by=hidekia which shows the crossing in action when I first got there, while a little drizzly after the wet morning everybody was still prepared with umbrellas close but not up.

I must have accumulated numerous pictures of Shibuya and in particular the crossing over the years and for the most part it has remained largely unchanged with many of the shops still there, while writing this and checking some facts and spellings online, it seems parts of the station will undergo refurbishment.

Speaking of the station, it is also worth finding the Tourist Information Desk for a complimentary copy of Time Out Tokyo which is always full of interesting articles in English. Free WiFi access continues to grow in Japan and while mainly in the major stations and even Subway stations underground as well as Starbucks, you can with your passport get a code to access the free WiFi in Shibuya.

I had traveled with my mother initially for the first five days in order to attend my Grandfather’s First Year memorial Service at the weekend in Yokohama. She needed to go to the hairdressers there and so we split up and agreed to meet back at Azabu Juban.

I struggle a little to recall where and what I saw in Shibuya that afternoon but like many tourists, I spent time watching the crossing and trying for interesting photographs. I must have popped into a couple of the stores that I knew from previous visits as well as saving some for another day. There are the Japanese shops that have branches of varying scale all over the city as well as in other cities like Loft, Tokyu Hands, Uniqlo and Don Quiote.

Loft, I would describe as a lifestyle shop with floors dedicated to stationary and Japanese goods as well as kitchen and bathroom accessories, character goods and novelty items as well as luggage and camping items.

Tokyu Hands is more for those actually making or interested in making things as well as having many of the same types of floors as Loft, in fact it may be easier to give the Wikipedia link.

Uniqlo has branched out to countries other than Japan and with its clothes priced at reasonable prices and sales popping up from time it’s a good place to stock up on items however do try things on first because a Japanese labeled XL is not always the same as a Western labeled XL.

Don Quiote or Donki is worth a visit for just how chaotic it all seems inside, the larger stores are often chock full of pharmacy and beauty products. Then there is the food with bulk bags of food which is good for stocking up on confectionery and snacks. Then there are floors with men and women’s clothes, some electrical goods, fancy dress outfits, brand (designer) items like watches. All of it arranged somewhat haphazardly and at discount prices, if anything it’s worth just taking a look around to see how bizarre it is. The Roppongi branch is probably one of the biggest and best stocked.

Just as in Europe where to an extent Japanese style is sought after, the same can be said in Japan and so the European stores like Zara, H&M have also made inroads and have stores in Japan, I don’t shop at either but have seen them in passing.

Also the global juggernaut that is Starbucks seems to have successfully entrenched itself into Japan with numerous branches dotted around.

Inevitably the rain started to fall yet again and out came all the umbrellas. The Japanese seem well prepared for the rain at all times and even if you have failed to carry an umbrella with you, it’s pretty easy to get hold of one from convenience stores for as little as 300 Yen. Umbrellas in motion transformed the crossing in all their variants and from my new favoured vantage point I filmed it again. https://instagram.com/p/4q6ERUpyBW/?taken-by=hidekia 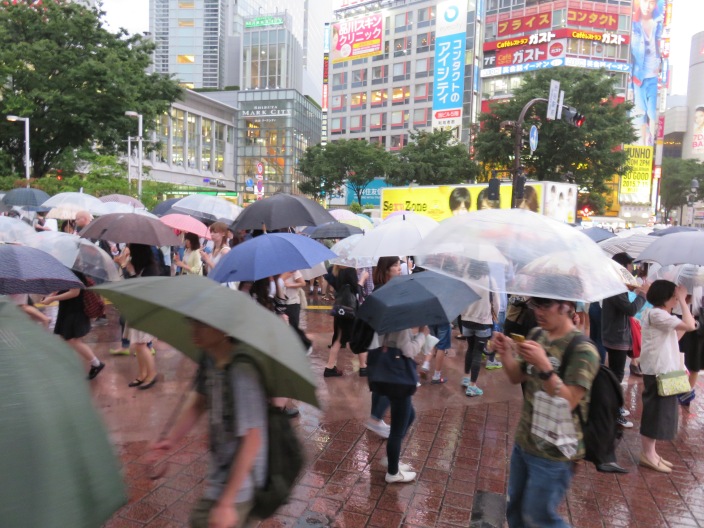 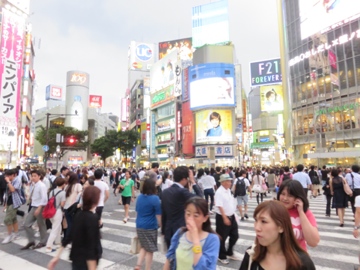 What makes a city great?

There are books, newspaper reviews, television programs, blogs, tumblrs and more all extolling the virtues of certain cities.

Some of you may found yourselves here because of your interest or love of Tokyo for example.

What I’m wondering is what sort of criteria people set for a city to become a great city.

Why is it so great?

I look forward to hearing some feedback… 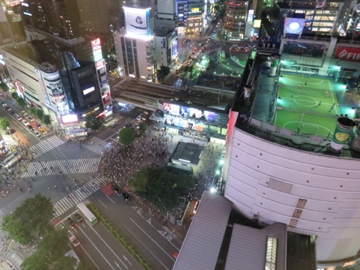